Iran and the current U.S made crisis in the Middle East

Posted on March 26, 2014 by ibrahimkazerooni

US has not forgiven Iran for its anti-imperialist revolution

The message is clear. It has already been delivered to Yugoslavia, Libya, Syria, and many other countries around the world: overthrow your reform-minded, independent, communitarian government; become a satellite to the global corporate free-market system, or we will pound you to death and subject you to a severe level of economic embargo and poverty.

Few days prior to leaving her post in late January, 2013, Hillary Clinton made a damning admission: she publicly confessed that the US-led sanctions against Iran are politically motivated and constitute a “soft-war” against the nearly 80 million people of Iran in order to achieve regime change. She stated that the reason for maintaining such an inhumane sanction is: “So we hope that the Iranian people will make known their concerns… so my message to Iranians is: do something about this.”

END_OF_DOCUMENT_TOKEN_TO_BE_REPLACED

Posted on March 4, 2014 by ibrahimkazerooni 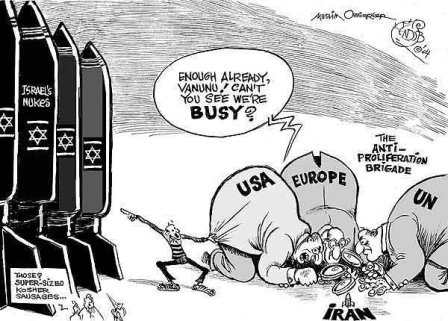 The latest round of negotiations between Iran and the U.S. (the so-called 5+2) for a long-term comprehensive nuclear agreement have ground to a halt. This is due to Washington’s last minute insistence to add new conditions to the talks to resolve “past and present concerns” about the “possible military dimensions” of the Iranian nuclear program. The U.S. and International Atomic Energy Association (I.A.E.A) charge is based on what the Iranians claim to be fabricated documents that neither Washington nor the I.A.E.A. are willing to share with Teheran for investigation. In his 2012 memoire, Mohamed El Baradei disclosed such documents to be a part of a whole series provided to Washington by Israel.[1] A cursory glance at the I.A.E.A., its tenets and philosophy will help clarity the essentially “colonial disputes” in the current situation.

END_OF_DOCUMENT_TOKEN_TO_BE_REPLACED

Iran, US and the Nuclear Agreement

Posted on February 7, 2014 by ibrahimkazerooni

The recent information on short term agreement in the Iranian nuclear issue is welcomed news that present unique and unprecedented opportunities for all parties involved. The least we can hope at this stage is that there is an encouraging shift in the US’s approach to Iranian nuclear issue from the rigid ideological to a more realistic position. President Barack Obama’s commitment to veto any Congressional legislation that might intensify sanctions against Iran in the next six months is a refreshing development that helps add momentum to the success of these negotiations.

A brief history of how this saga began would be helpful in understanding the positions taken by all parties in these long and arduous negotiations. END_OF_DOCUMENT_TOKEN_TO_BE_REPLACED

Posted on October 21, 2013 by ibrahimkazerooni

The Dream of the Ottoman Empire II just collapsed…

The news broke not long ago that Turkey, a longtime, staunch NATO member just broke an unwritten rule of that global military alliance: it has announced it is considering a major $3.2 billion arms purchase from China of an advanced missile defense systems. The announcement triggered something approaching a panic in NATO circles. A number of commentators argue that Turkey is dissatisfied with NATO’s refusal to engage more militarily in the Syrian conflict. END_OF_DOCUMENT_TOKEN_TO_BE_REPLACED

Humanitarian Intervention: Destroying Nations To Save Them..

Posted on October 14, 2013 by ibrahimkazerooni

By Ibrahim Kazerooni and Rob Prince

“The fate of Iraq is a sideshow, the terrorist threat is a red herring, and the radical Islamist’s dream of a worldwide jihad against the west is a fantasy, but the attempt to revive Pax Americana is real.”

The notion of “humanitarian intervention” by former imperialist and now neo-colonial powers is as old as the hills. One can trace such pretexts back far in modern history. Two examples, among many, suffice: the 1898 U.S. invasion of Cuba, Puerto Rico and the Philippines was done in the name of saving those peoples from the Spanish yoke. Hitler used it as the excuse to annex the Sudetenland regions of (then) Czechoslovakia to supposedly “save” the poor German residents of that country. END_OF_DOCUMENT_TOKEN_TO_BE_REPLACED

Striking Syria…What If …..They Strike Back?

Posted on September 4, 2013 by ibrahimkazerooni

By Rob Prince and Ibrahim Kazerooni 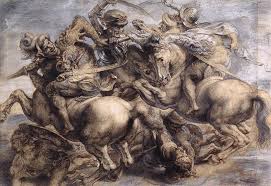 A reproduction of Leonardo DaVinci’s powerful (and long lost) description of the stupidity of war: The Battle of Anghiari

A few days ago writing about the Obama decision to postpone a military strike against Syria, we speculated:

At the least, it buys time to build opposition to such a reckless course, at the most, it is the beginning of a change in direction. Too early to tell. I would hope the latter but fear the former.

Having lost a key ally as Great Britain announced it would not participate in a military strike, Obama’s foreign base of support had shrunk to nearly naught. He made a tactically clever move: to shore up his domestic support to compensate for the loss. From the tenure of the discussion in the Senate yesterday, which we had to watch (for a while anyway), it was pretty clear that the US Senate will stand behind Obama and formally support military action. Although there are stipulations, limitations to Obama’s field of action (no troops on the ground, a sixty day window for military strikes with the possibility of a further Congressional approval), war has a way of escalating from one set of conditions to another and those limitations might turn out the `flexible’, as they were in the case of Libya where a no fly zone transformed almost immediately into an `air attack zone’. END_OF_DOCUMENT_TOKEN_TO_BE_REPLACED

No To U.S. Led Attack On Syria…Obama Playing With Fire – Part 2

Posted on August 28, 2013 by ibrahimkazerooni

While the US, UK and France (the new and the old colonial powers) debate their response to the suspected chemical weapons use in Syria, the Syrian government continues to deny the allegations. Since last Saturday we have witnessed a number of reports, documents and pictures that plainly indicates that the use of these weapons was by the mercenaries supported by the US and the Saudis, not by Damascus.

The US on the other hand has ignored all such evidence and continues to talk of attacking Syria., which might have already taken place before this article goes to print. The Syrian government and its allies maintain that it was the mercenaries that launched a “false flag” attack by using chemical weapons on civilians, anticipating that the blame would fall on the government and provoke the international community into a response that would help their positions on the ground after being defeated by the Syrian army in a number of confrontations. END_OF_DOCUMENT_TOKEN_TO_BE_REPLACED

No To U.S. Led Attack On Syria…Obama Playing With Fire (Part 1)

Posted on August 28, 2013 by ibrahimkazerooni

by Rob Prince and Ibrahim Kazerooni

“Now we sit and wait while the Washington regime makes its next lethal move. Let us lift our voices in unison to prevent it. “

“Before another rush to judgment and “punishment” based on a presumption of guilt, as in Iraq, this time, let the UN inspectors do their job: We still don’t know who used chemical weapons in Syria — regime or rebels. Without UN Security Council’s approval, any military action by US and its NATO or even Arab allies will itself be illegal, an international war crime itself. Such an attack will not protect innocent civilians, but hurt them. US attacks will backfire, trigger a retaliatory response, escalate the civil war into region or world war.”

This is the second time in six months that the United States has accused the Syrian government of using chemical weapons. The first time, Washington was forced to eat its words as international organizations, including Human Rights Watch, claimed that it was the rebels and not the government forces which had employed them. END_OF_DOCUMENT_TOKEN_TO_BE_REPLACED

Posted on August 27, 2013 by ibrahimkazerooni 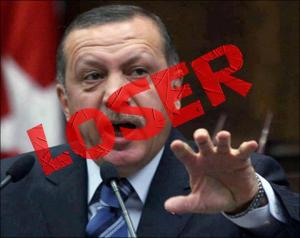 As we write these words, from all appearances, the United States, UK and France, with considerable support from Israel, Saudi Arabia and Qatar, is on the verge of launching a Cruise missile attack against Syria. Turkey, for its part, has been an intimate player in the US plans to bring down the Syrian Assad government and will continue to play a prominent role to this end. But, despite this, Turkish influence in the Arab world is starting to shrink as the Turkish alliance with Qatar and the Muslim Brotherhoods is unraveling, and with it, a card in Washington’s Middle Eastern deck is crumbling. Central to all this are the events in Egypt, the removal of Morsi from power and the campaign by the current Egyptian government to crush the Muslim Brotherhoods politically.

In what follows, we look at the evolution – and devolution – of Turkey’s position.

In the past few days a number of reports have surfaced on Turkey’s indignation on the turn over the events in Egypt. Yeni Shafak the newspaper close to the Turkish prime minister published a scathing article against the leaders of Saudi Arabia, Kuwait, Jordan, UAE as well as Palestinian Mahmud Abbas calling them the “the axis of evil” in the Middle East. This was followed by Bekir Bozdag, Turkish deputy prime minister, attacking the Arab Cooperation Council for not taking a stronger position on Egypt’s military takeover and the removal of Morsi and his Muslim Brotherhoods (MB) from office. Turkish leaders have also taken to laying the blame for the Egyptian coup at Israel’s doorstep (ironically, as Turkey moves closer to Israel strategically, with Washington’s encouragement). END_OF_DOCUMENT_TOKEN_TO_BE_REPLACED

Egypt: The People Rise Up; The Deck Is Reshuffled – Part Three

Posted on August 8, 2013 by ibrahimkazerooni

Part One of the Series

Part Two of the Series

The situation unfolding in Egypt is confusing to many Americans trying to follow the events. A number of questions have emerged in the aftermath of the Mohamed Morsi’s removal from power and the blow suffered thereby to the Muslim Brotherhoods.

What are the questions people are asking?

Was the United States involved – in conjunction with the Egyptian military, supported by the vast masses of the Egyptian public in Morsi’s removal?

Aren’t the Muslim Brotherhoods allies with the United States? Don’t they support U.S. Middle East policy economically (neo-liberalism) and politically (trying to bring down the Assad government in Syria)? And if indeed the Brotherhoods are U.S. political allies, why would the United States not just support, but actively participate (as they did) in Morsi’s removal? The parameters of a somewhat clearer picture of the Egyptian situation are coming into focus. END_OF_DOCUMENT_TOKEN_TO_BE_REPLACED